Welcome to the website for Oficina da Capoeira, Chichester.


Currently the group is on a brief hiatus whilst the instructor takes a break to settle in with his new born second daughter.
Classes will return, watch this space!

In capoeira the bateria refers to the musical instruments in the roda. A full bateria consists of three berimbau (gunga, médio and viola), a pandeiro (a Brazilian tambourine) and an atabaque (a drum). In addition, there may also be a reco-reco (a scraper) and agogô (a kind of bell).

At the very least, a berimbau is employed to provide the instrumental to accompany the songs. This may not always have been the case, and the subject is very much under debate (see Capoeira: The History of an Afro-Brazilian Martial Art by Matthias Röhrig Assunção for more on this debate). Evidence for this can be found, for example, in a painting by Johann Moritz Rugendas from 1825, Capoeira or the Dance of War which does not feature the berimbau: 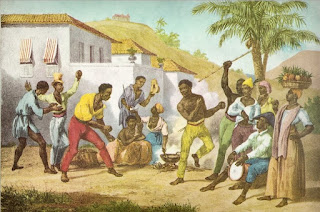 However, whatever the origins of the berimbau's place in the bateria, it is certainly now the most important of the instruments in capoeira.

The above line up for the bateria has only been formalized since the 1960s. Mestre Bimba's bateria consisted of two pandeiros and a berimbau; and Mestre Pastinha experimented with a number of line ups (including the guitar 'viola de corda' and Spanish castanets) before settling on the now recognised bateria listed at the start of this post.

Graduado Kung Fu
I started capoeira in the summer of 2008, joining Oficina da Capoeira, under the instruction of Mestrando Primo and Instrutor Lua in Cheltenham, It has been a passion ever since then, and with Mestrando Primo's blessing, I am ready to start teaching capoeira.

If I get any sponsorship/support their info will be here. If you would like your info here, please email me.